All the Light We Cannot See by Anthony Doerr 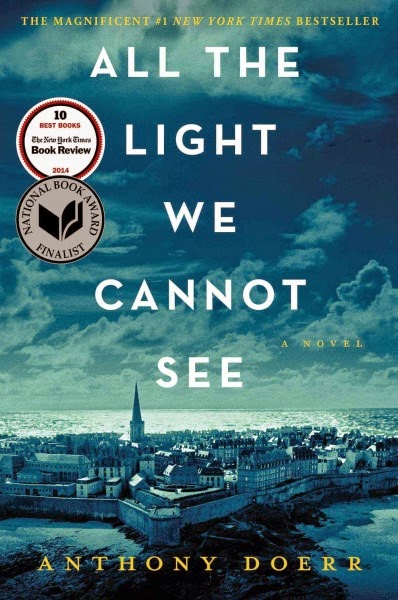 I love to pick a book to read by the light the Christmas tree on my iPad during the holidays, and this year I was intrigued by all of the accolades All the Light We Cannot See was receiving – finalist for the National Book Award, New York Times #1 bestseller, Indie Next Pick and the list goes on.  I had read enough to know it is a WWII story of a young boy and a young girl who are united by the power of radio.  Historic fiction isn’t at the top of my lists of reading interests, but after reading a little bit about Anthony Doerr and discovering that he grew up in Cleveland, Ohio, I knew I had to read this book.  Doerr’s prose is beautiful poetry!  He weaves a compelling connection between his alternate narrators – Marie-Laure who lives with her father in Paris near the Museum of Natural History and a German orphan named Werner who is snatched up by Hitler’s Youth for his aptitude for science.  Although the book is very long – 544 pages – the chapters are relatively short and the jumping back and forth between narrators and time periods make it an unbelievably quick book.  I was fully satisfied by the novel and it was the rare sort that made me interested in doing more research into the ancient walled city of Saint Malo, the seizure of French art during the German invasion and the history of radio.  Doerr explains his various inspirations for the novel in this short video.

The Story Hour by Thrity Umrigar

Just before Christmas, I was having a nostalgic craving for a good old-fashioned Christmas shopping experience at a local book store.  Problem is – there aren’t any anymore.  So we ventured to Mac’s Backs Books on Coventry , which is a little out of the way, but one of the only authentic bookstores of miles around.  We milled around, lingered, lifted books off the shelf and read a few pages.  That is how I found The Story Hour by local author Thrity Umrigar.  Turns out Umrigar received an M.A. From Ohio State University, and a Ph.D. in English from Kent State University.  I read the cover flap and decided to continue my abstinence from book buying and get it from the library – digital loan.

The Story Hour is a novel in two voices.  The narration alternates between an Maggie, an African-American psychologist married to a professor and her client Lakshimi, a younger Indian woman from a small village who helps her husband run his Indian grocery.  Laksmimi has attempted suicide, which precipitates her relationship with Maggie, who she meets in the hospital following her botched attempt. A relationship develops between the two woman and, through various plot twists and turns, their lives become irrevocably intertwined.

I enjoyed the book enough to say I would recommend it.  Both women are terribly flawed and vulnerable, which is why their stories seem so true.