The Girl on the Train by Paula Hawkins

The Girl on the Train by Paula Hawkins rose to #1 on the New York Times Bestsellers List last week, and I finished reading it just in time to agree – it is the new Gone Girl.   I never read Gone Girl, haven’t seen the movie either.  I would generally say crime fiction isn’t my genre, but after a recent train trip to Chicago to see our daughter, I found myself in a large downtown Barnes and Noble bookstore where I picked up a copy of this book intending to read the first page.  The first page turned into the first chapter, and then another and then another.  That is why The Girl on the Train will stay atop the best sellers list.  The narrative travels at a speeding train’s pace and, as the cover image hints, it compels the reader with a Hitchcockian, “Rear Window” brand of intrigue.

Rachel, one of the three female characters, is a sort of train wreck of a character.  She is an out of work, alcoholic divorcee who continues to take the train into London each day to keep up the charade of employment, so that the girlfriend who she is temporarily living with won’t kick her out of the apartment.  Since she isn’t really going to work, she can drink canned gin and tonics on the train and allow herself the revelry of staring out the window, imagining the lives of people she sees on the front porches outside the stations where the train stops.  And so it begins!  She sees something curious and disturbing one day – or does she?  Due to her abuse of alcohol and her fragile mental state, she frequently blacks out, or seriously doubts her memory in hungover light of day.  So can she be a reliable witness for a murder case?

She isn’t even a reliable narrator.  Neither is Anna, wife of Tom, Rachel’s ex-husband.  Neither is Megan, murder victim and wife of Scott, who has a secret past creepier than the events surrounding her murder case.  These three narrate the novel which switches frequently from story teller to story teller, from past to present, from the discomfort of home to the safety and anonymity of a moving train compartment.

The Rosie Effect by Graeme Simsion 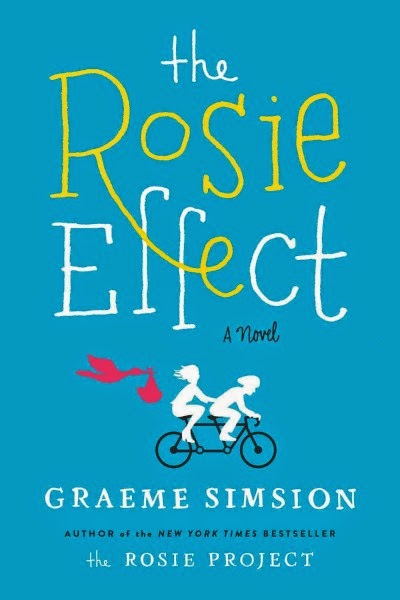 I loved The Rosie Project  and I can’t wait for the movie.   I love Don Tillman and his hilarious wife, Rosie, so I knew I would live the Rosie Effect.  I got a digital library loan of the novel, which was my first read in OverDrive.  I’m not sure I like it as well as I like reading Kindle editions, but it did give me the added satisfaction of letting me know I opened the book just 25 times and finished it in 6 hours and 36 minutes.  And what a fun six and a half hours those were.  (I read most of by a fireplace as a winter storm pounded the Northeast Ohio Lake Erie shore.)

In this sequel Rosie is pregnant with a baby she and Don had not discussed having together.  His quirks and idiosyncrasies as a man and husband look as if they will be exacerbated by the responsibilities of parenthood.  I laughed out loud many times while reading about the troubles Don manages to get himself into.  It is hard to believe that until recently Graeme Simsion was a name associated with the theory of data modeling and not a popular author.  Everyone I know who has read The Rosie Project loved it and I will be recommending the Rosie Effect for a long while to come.

Us by David Nicholls 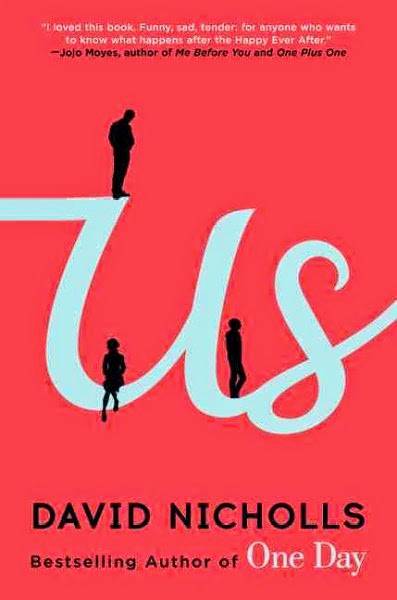 I really enjoyed One Day by David Nicholls and had read enough pre-publication hype about Us to convince myself that I would love it too.  I was not disappointed!  Nicholls is an author and screen writer and I am already anxious for the movie version of Us, especially if the movie is true to the European vacation itinerary of the novel.
Connie Peterson tells her husband, Douglas, that she plans to leave him after they return from a trip they have planned to take with their son, Albie, who is about to leave for college.  The plan is a grand tour of France, Spain, Amsterdam and Italy, complete with all the art museums and requisite life-changing tourist stops.  But the life-changing happens as a result of people more than places. The reader travels along inside Douglas’s simultaneously humorous and painfully honest narration.  Although the optimistic reader hopes for a happily-ever-after ending, pleasant realism is a pretty good was to end a pretty endearing story.