One of the reasons my son was most excited about our recent visit to Pennsylvania was to show us around one of his favorite places to eat and drink – Tröegs Brewery in Hershey PA. As we pulled into the parking lot on a Friday evening, the place looked packed, but he assured us that the tasting room was large and it would be worth the wait, should there be one. He also advised checking out the merchandise in the gift shop, since it closes early. All sorts of tee shirts and beer related souvenirs arranged in a spacious store with a window into the production facility. 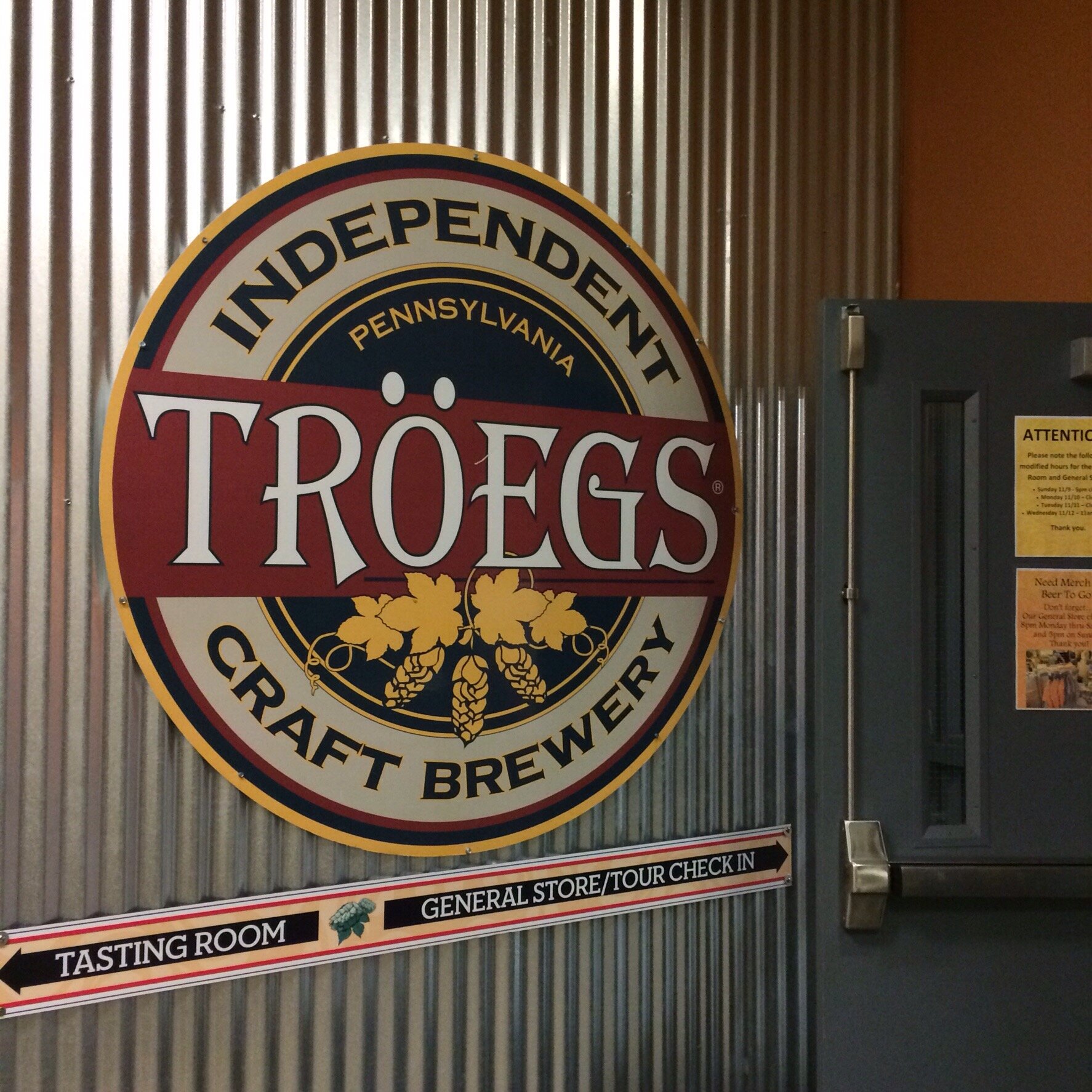 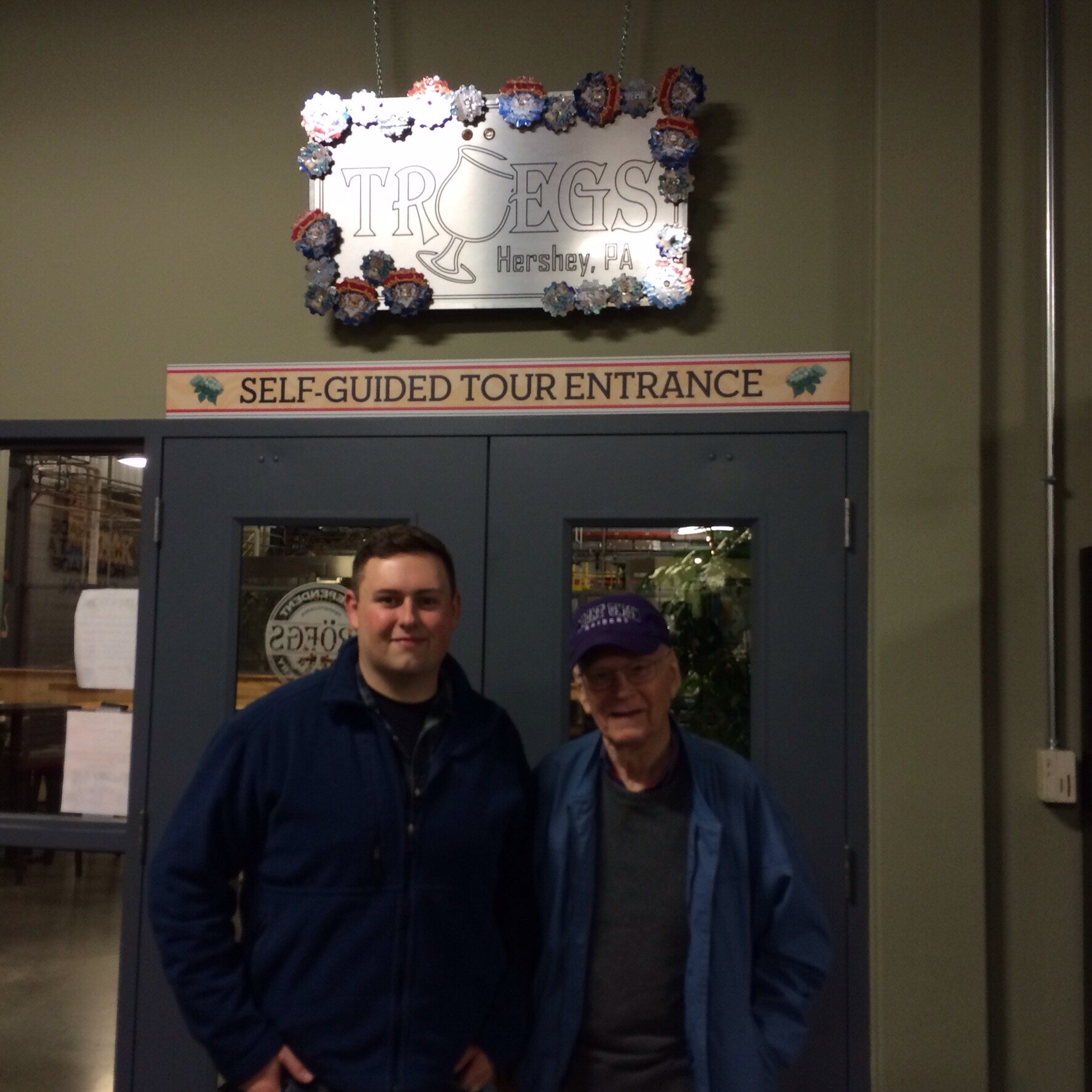 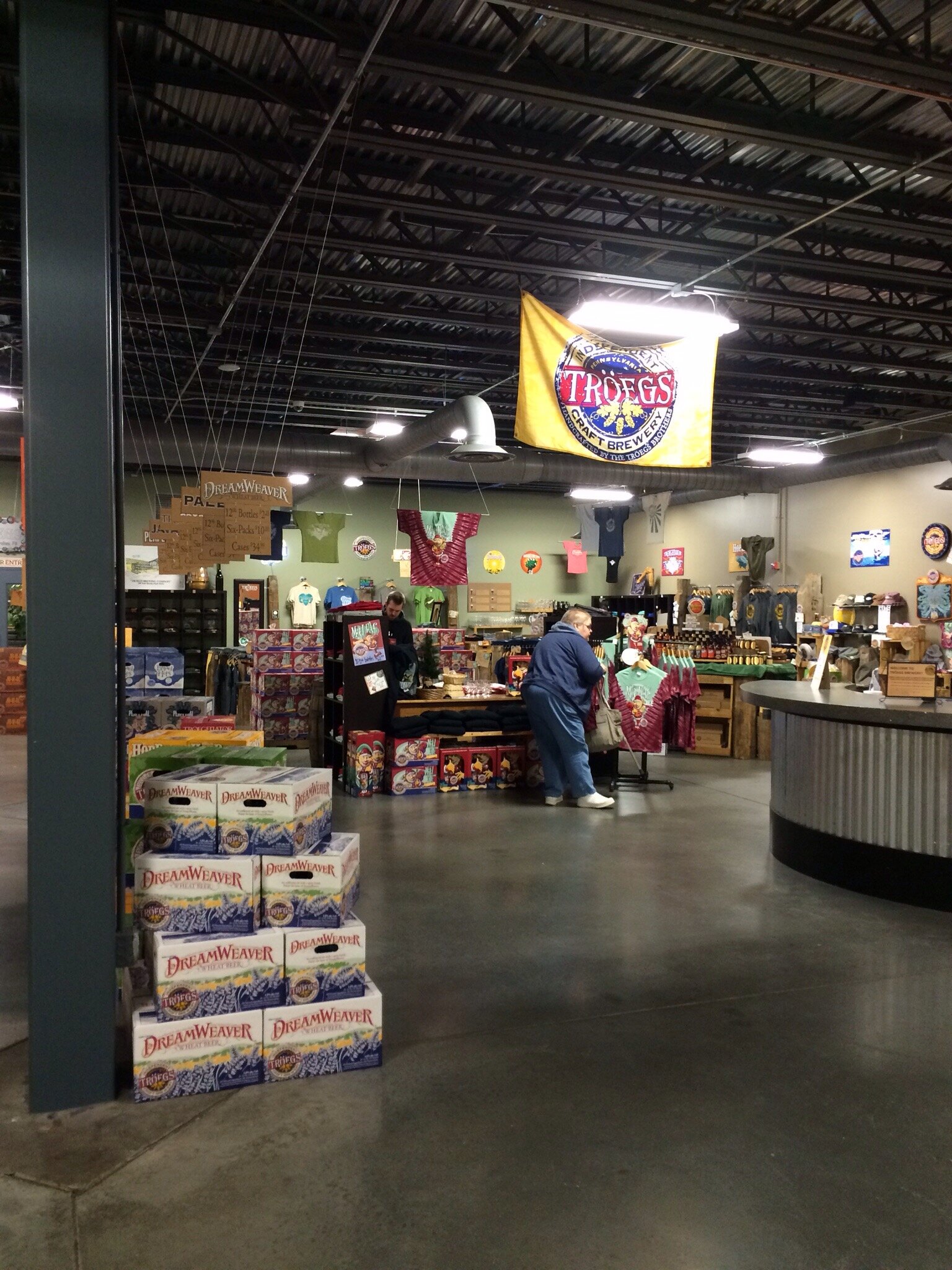 Upon entering the tasting room, we were greeted by a host who explained how to get beer and food and described a number of specials. The room is full of booths and long tables to share. We were in luck when we spotted a table of folks getting ready to leave, so we sat down and studied the beer menu to make our sampler selections. Sampler trays are offered two ways – six samples from their Year-Round Beer list for $8 or Pick Three from the whole list which includes limited draft beer and Hop Cycle Seasonals for $5.50. The detailed beer menu included information about ABV and IBUs as well as clever descriptions, such as “colossal, palate-numbing” for the Impending Descent Stout, which was my favorite. 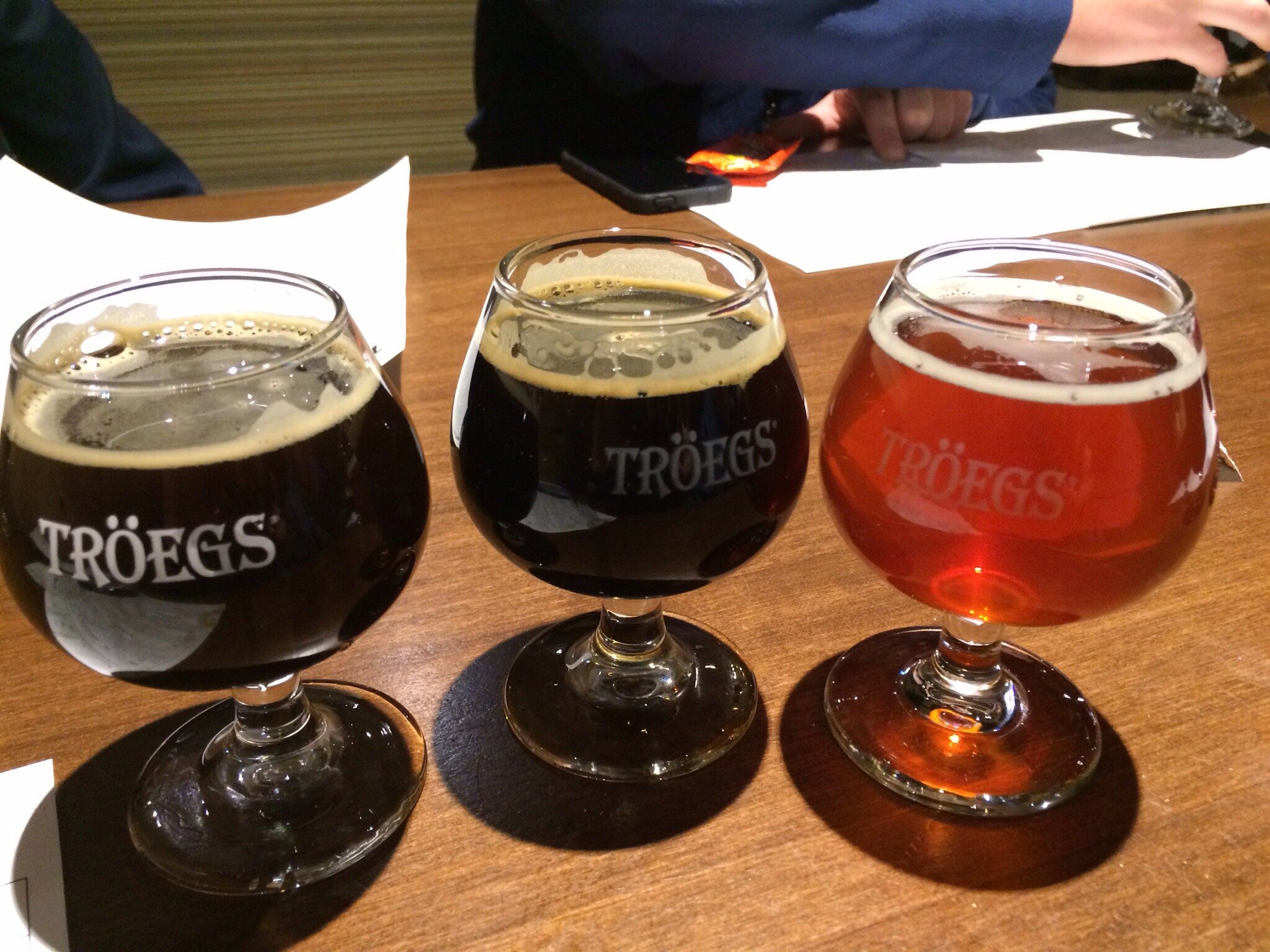 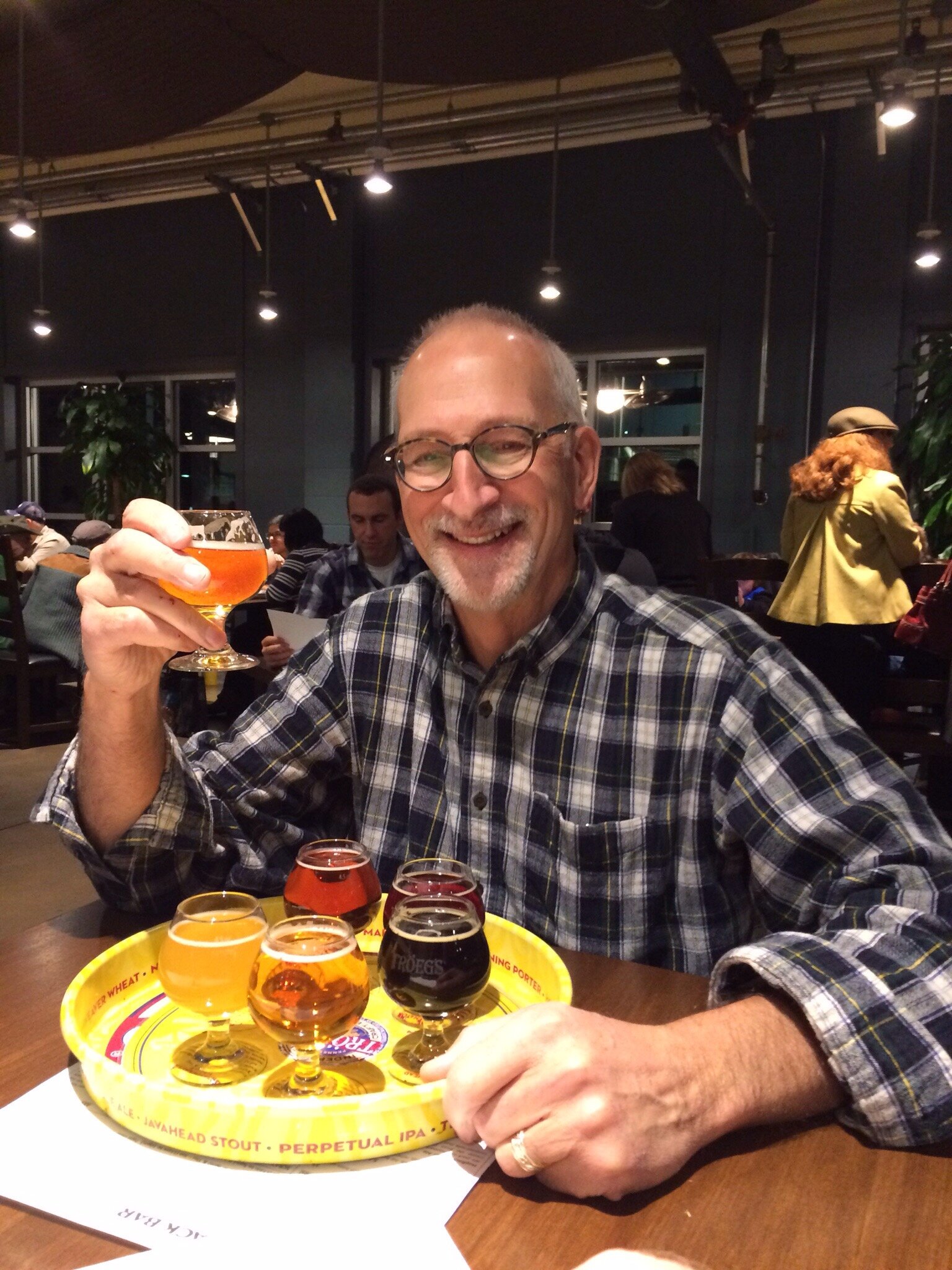 Beer orders are placed at the bar – food orders are placed at a counter where you also pick up your trays of food after your buzzer goes off. We decided to share a couple of appetizers from the “Shared” section of the Snack Bar menu – Poutine hand-cut fries with turkey neck gravy, celery salt, sage, cheese curds and cranberry ketchup and a charcuterie tray which came on a round wooden board and included house made pickles, radishes and horseradish mustard. 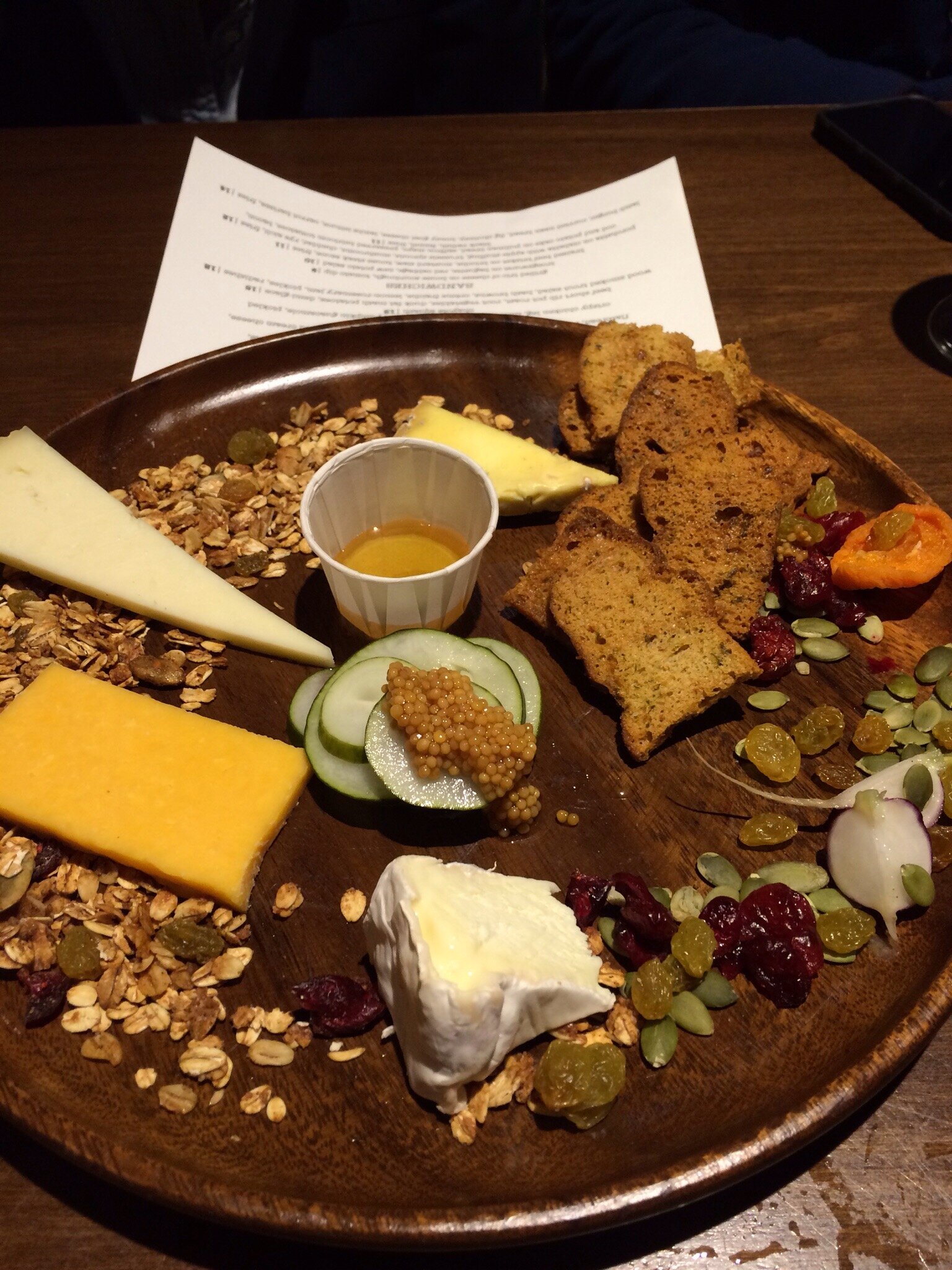 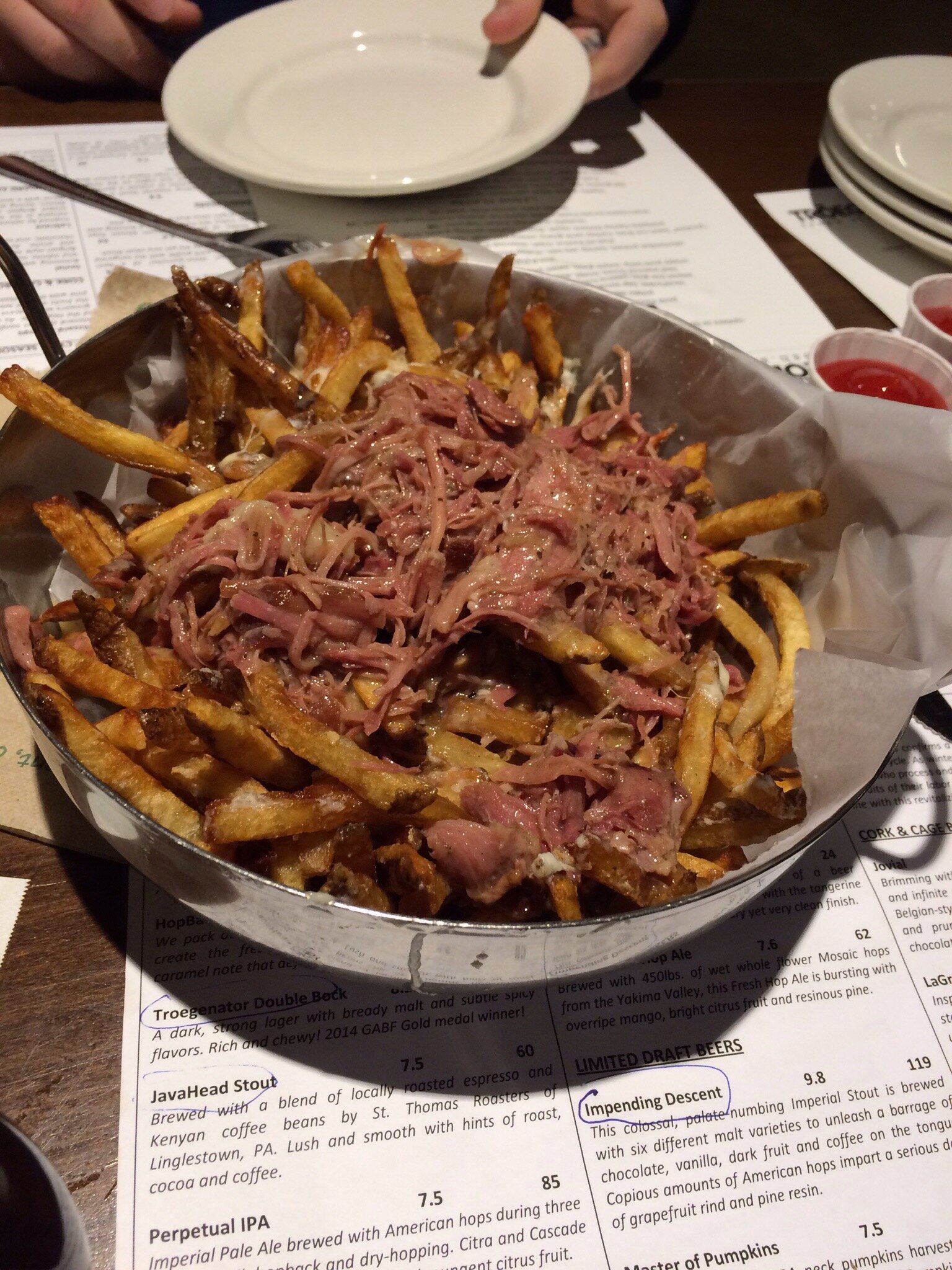 Entree selection was even trickier! So many interesting choices from a menu that changes seasonally and includes a list of farms and friends which source their ingredients. I had the crispy chicken leg with mole spices, black bean tacos, pumpkin guacamole and pickled chayote squash. David ordered a troegswurst sandwich, and Ben got the beef short rib pot roast with root vegetables, and duck fat mashed potatoes which came in a canning jar. It was accompanied by a wheat roll and a little paper cup of the most delicious smoky butter I have ever tasted. Candice got duck confit with almond stuffing, pear relish and cardamom syrup. 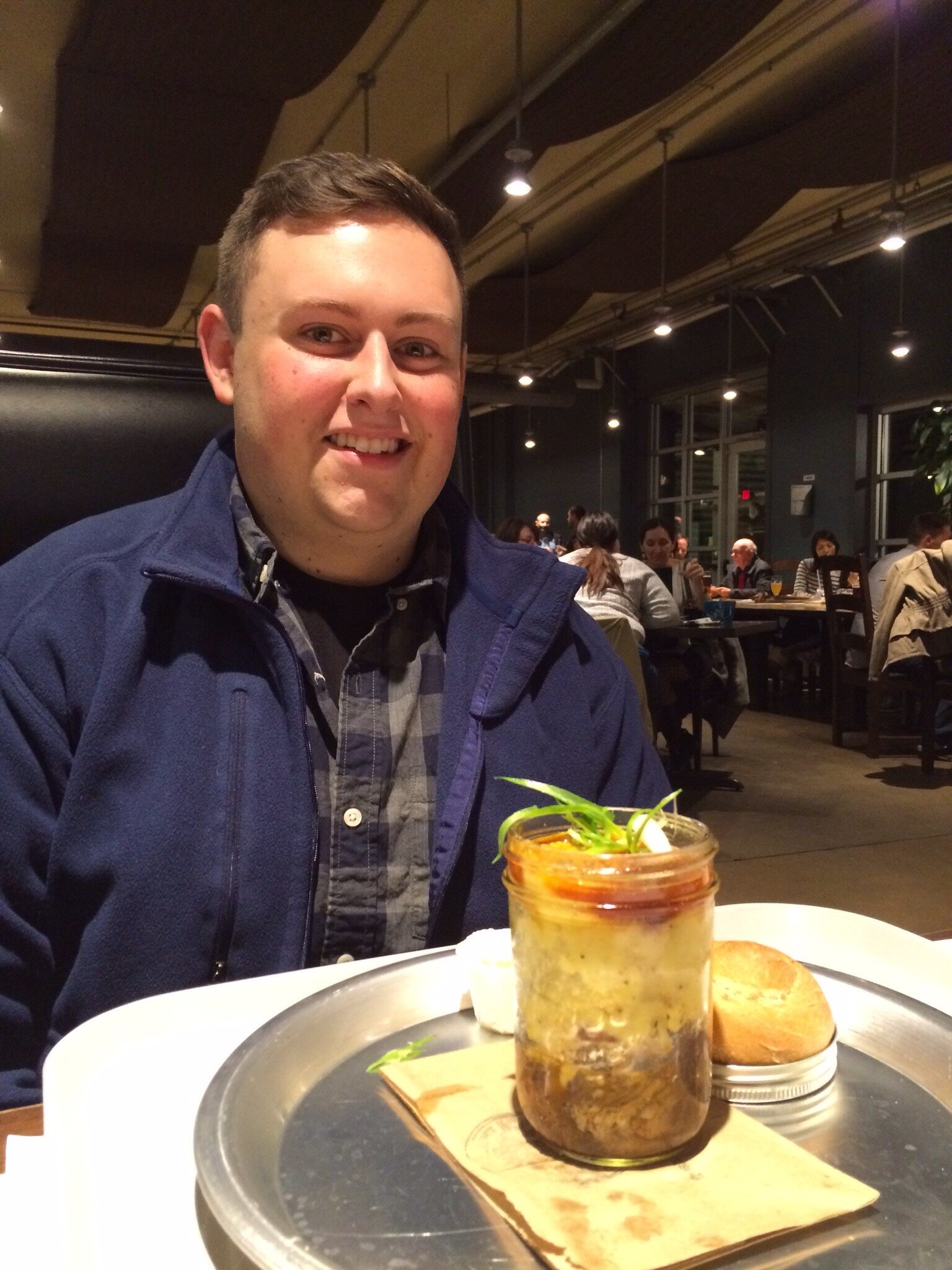 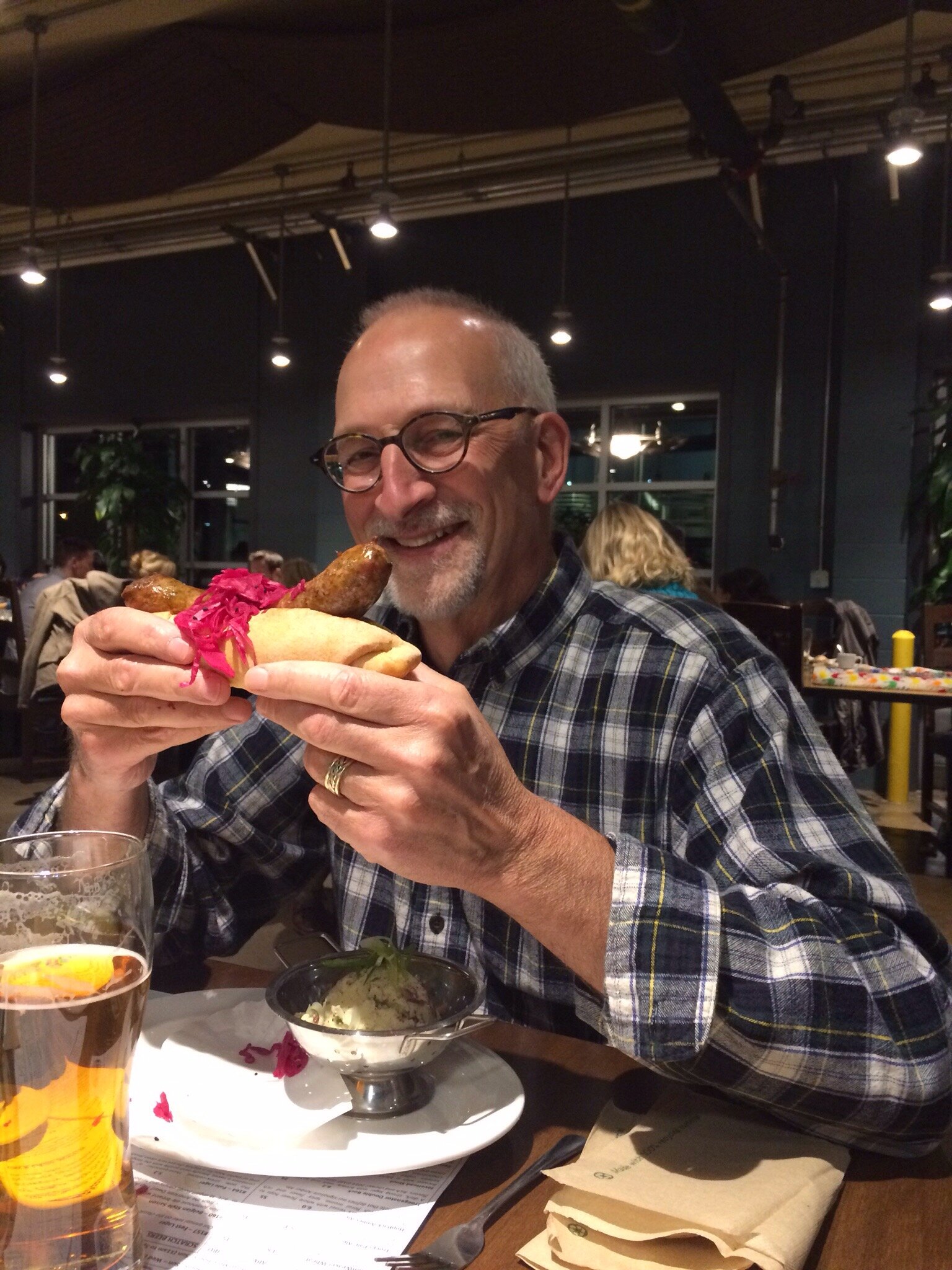 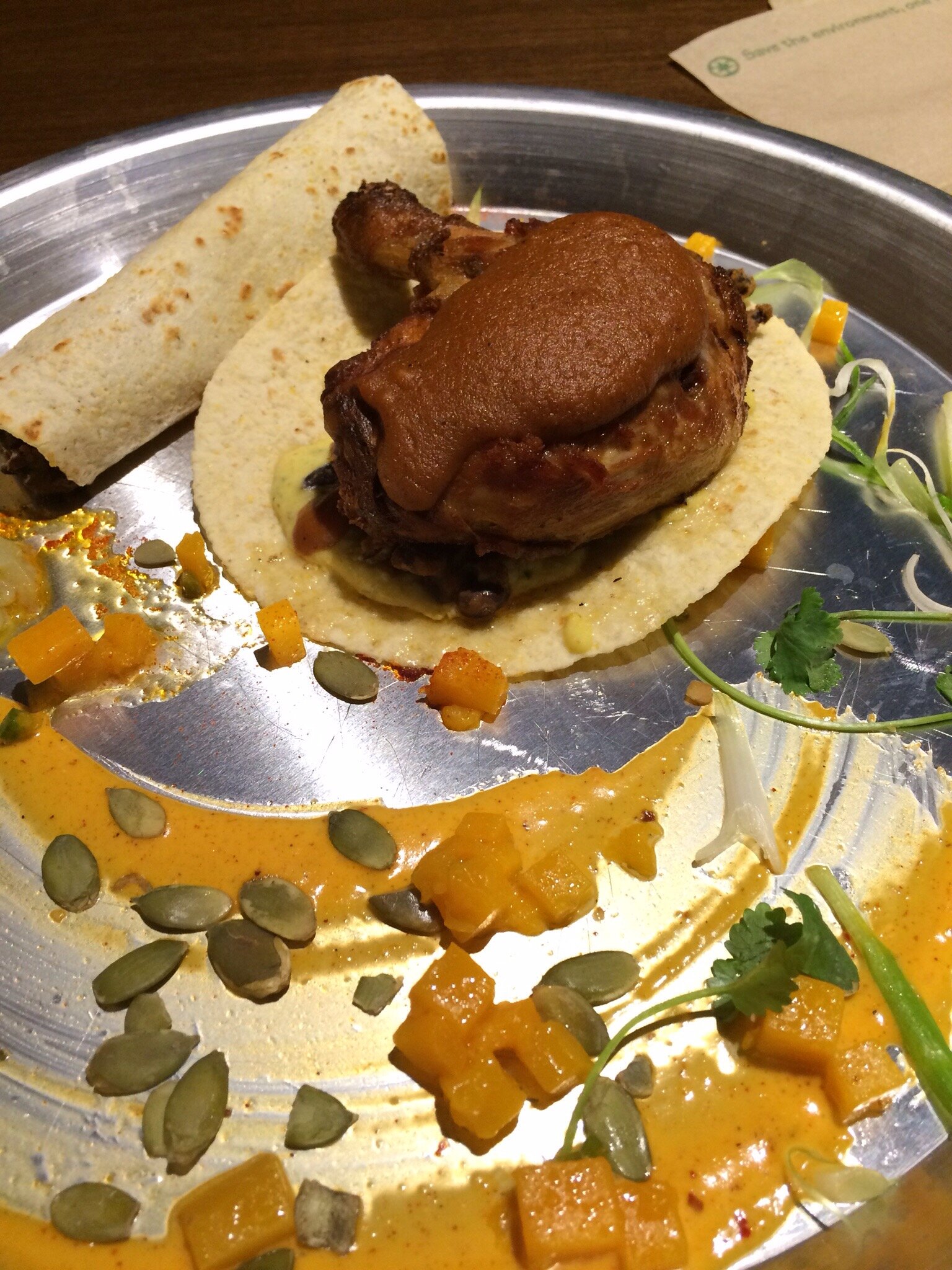 Since I am a sucker for holiday brews, I had to order one Mad Elf Ale – brewed with sweet and sour cherries, local PA honey and chocolate malt! 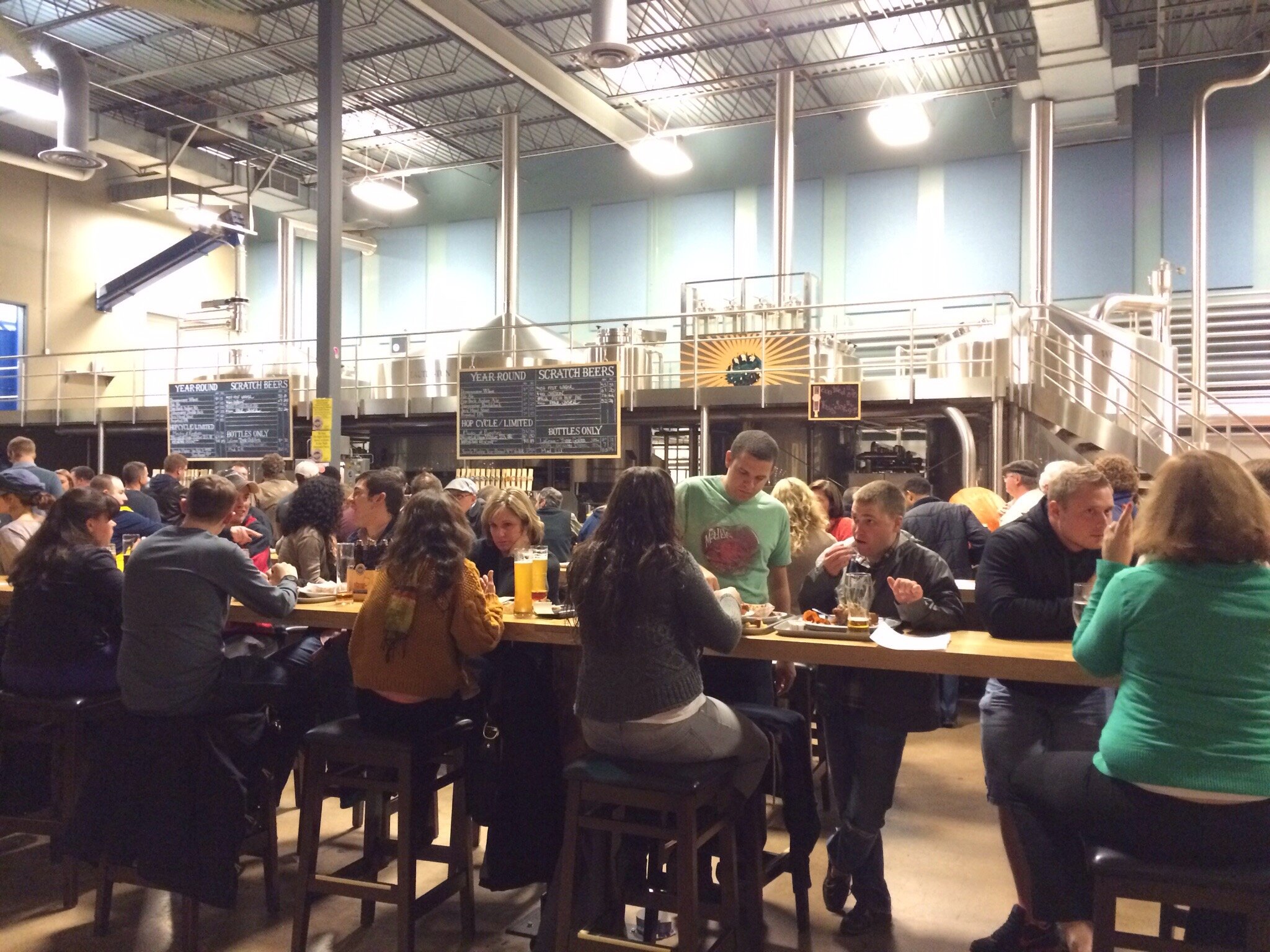 We piled back into the car, stuffed and happy, yet doubting whether we had made the best menu choices in light of all the other tempting selections we had not been able to sample.

Lucky for us, our Sunday drive brought us back to Hershey for a little time at the outlet mall and a chance to see the Hershey kiss streetlights in the daylight – and it just so happened to be dinner time. Visit #2! No complaints.

This time we all knew what beer we liked, and the menu took less time to sort through. We started with a basket of popcorn with brown butter and rosemary salt to share. David got the deconstructed lamb burger which is served on curried naan, Ben chose the venison and aged cheddar bologna which was served with a tiny cast iron skillet of braised red cabbage and I decided to try the wood smoked trout salad. No traditional salad here! It was served in a small canning jar and tasted like tuna salad’s worldly sophisticated sister. Another round wooden serving tray with bread crisps, crème fraiche, lemon rosemary jam, pickles and radishes and a tiny trio of creamy potato pancake like hash browns. 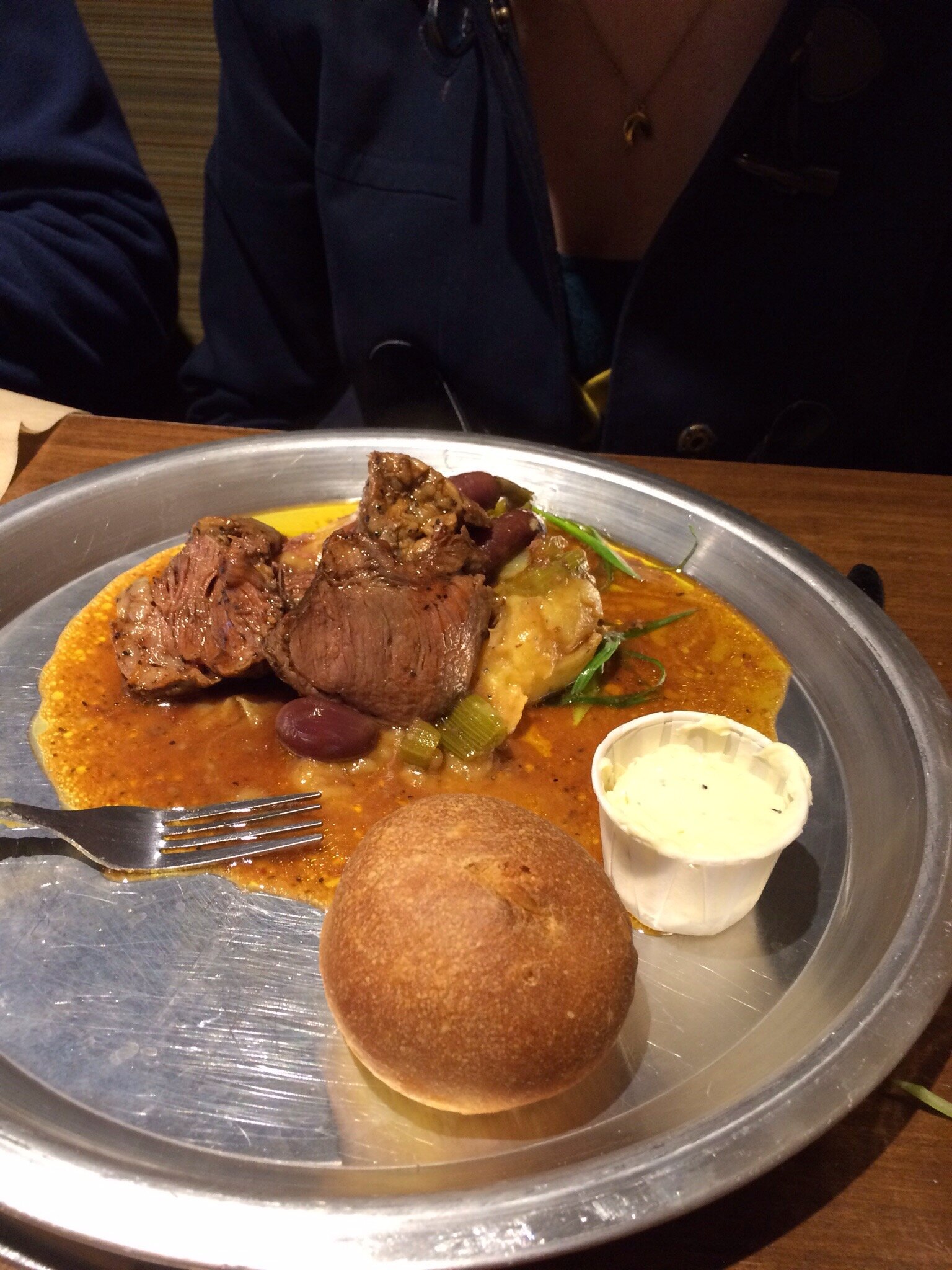 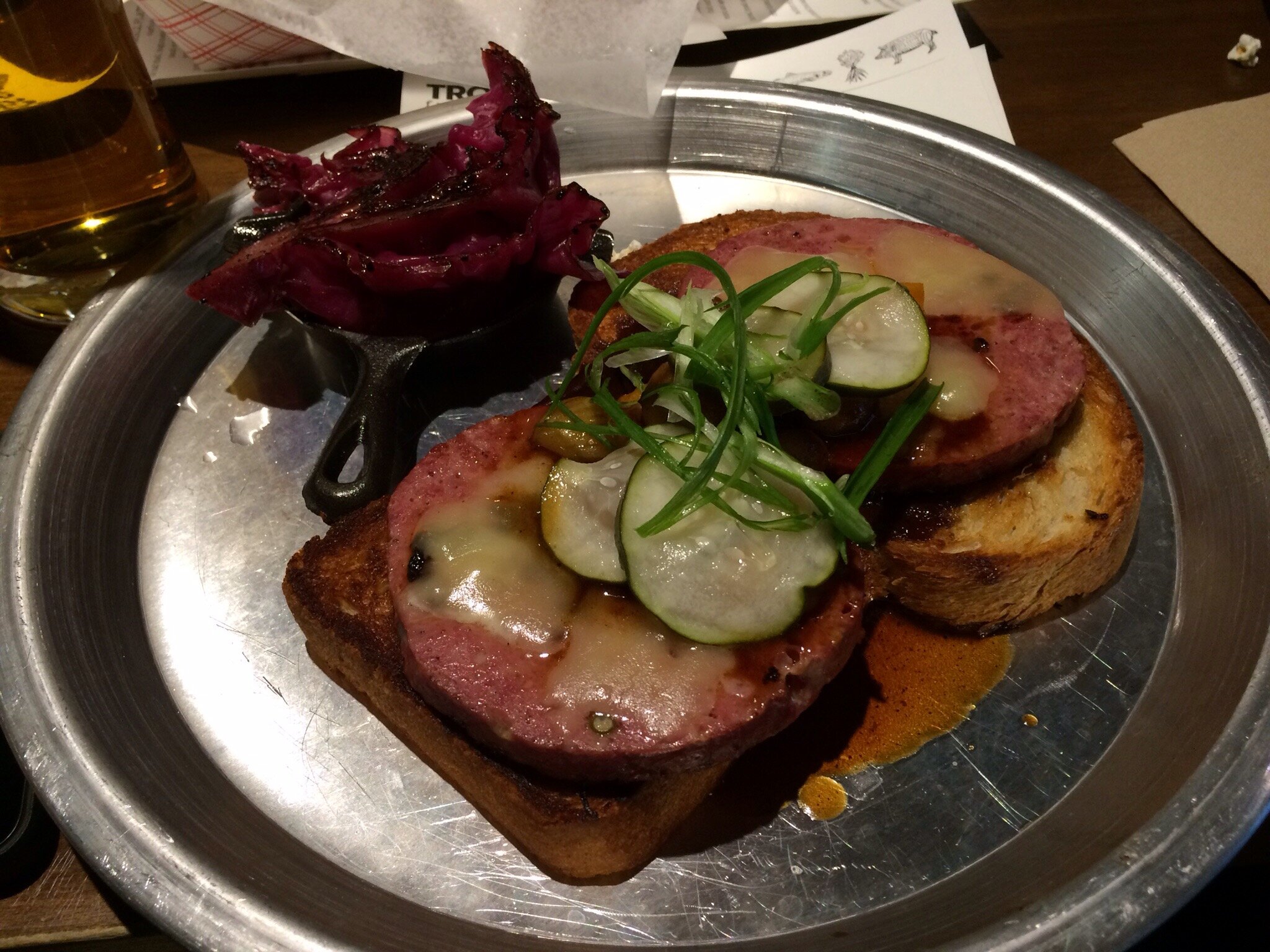 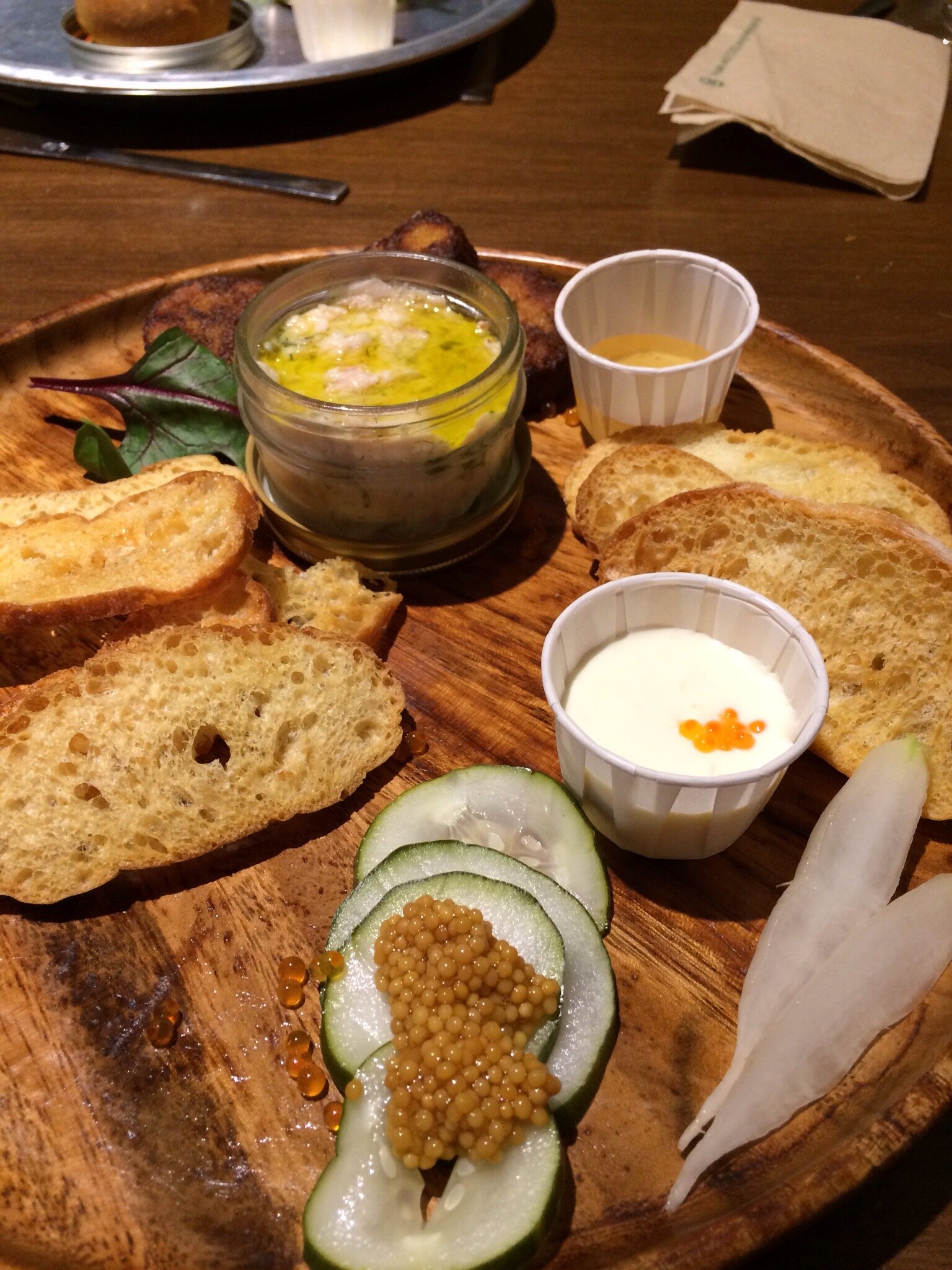 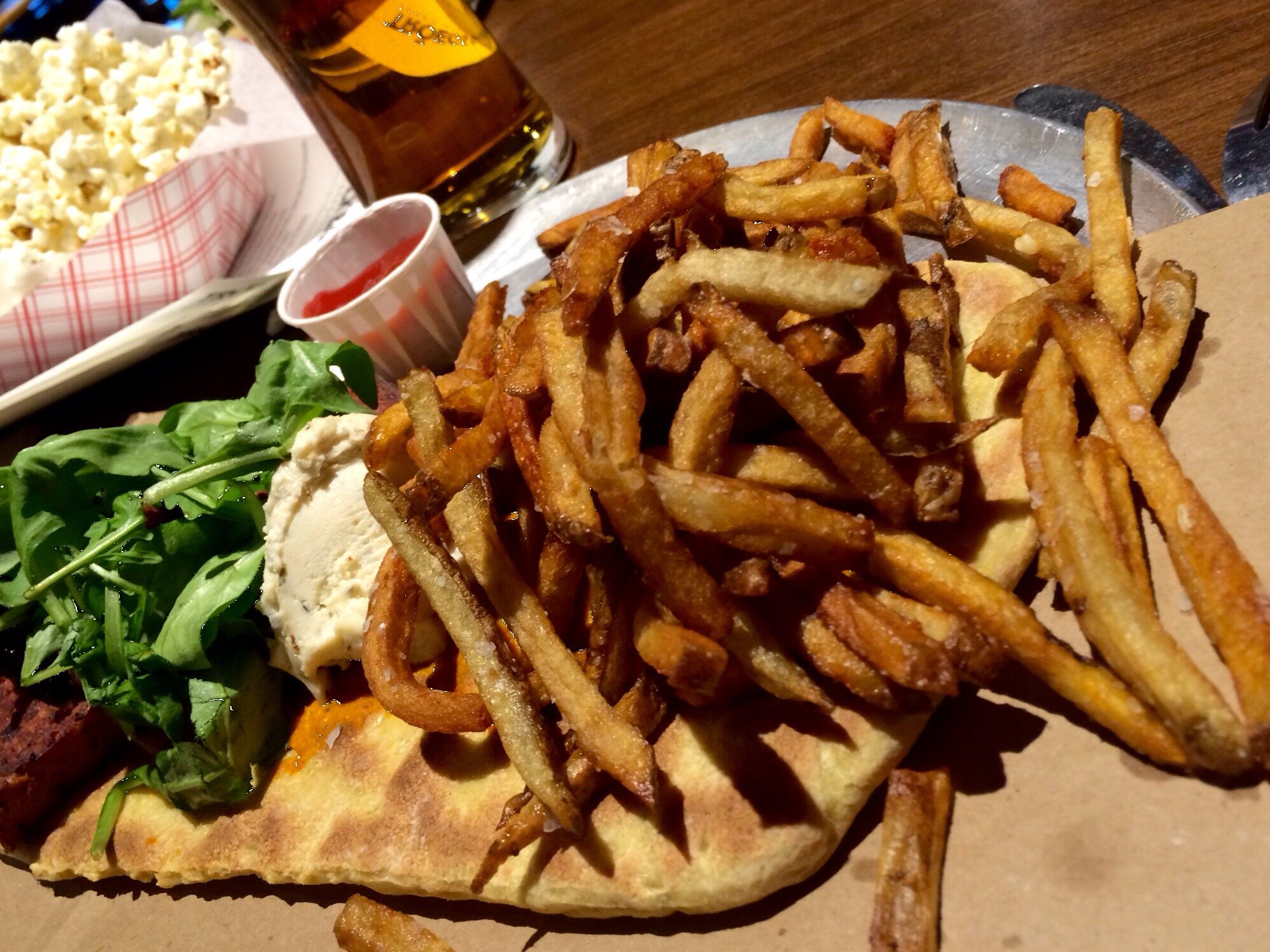 I love eating out and trying new dishes, but I describe the food at Tröegs in such detail because it is an awesome brewery that could get by with serving their Oktoberfest pretzels and other simple bar fare. Instead the menu might trump the beers!

What did we do when we left? Go back to Ben and Candice’s apartment and continue the food coma by watching Chef.

A Day of Breweries in Kalamazoo

We decided to celebrate our 12th wedding anniversary with an overnight in Kalamazoo, MI.  Why Kalamazoo, most of our friends asked?  Food, wine and BEER!  In April 2014, U.S. World & News Report named Kalamazoo as one of 8 undervalued beer cities in the world.  I made a reservation at The Kalamazoo House, a  lovely bed and breakfast and we enjoyed a beautiful fall to a very cool city we initially knew very little about.

My investigation in to breweries to visit suggested a good place to begin would be The Kalamazoo Beer Exchange.  Located in the historic Globe Building in downtown Kalamazoo, The Beer Exchange offers 28 rotating draught beers from around the world, with prices based on real-time sales, like the stock market, resulting in an ever-evolving happy hour. Occasional “market crashes” will occur daily, dropping beer prices to their all-time low.

We did experience one drop in the market, which resulted in the immediate appearance of our server who explained that you could stock pile a few beers at their low prices if you were interested.  What a concept!  The food was decent and the atmosphere was great for our first night.The next day we knew we were going to have to pace ourselves.   Our first order of business was a visit to the Gilmore Car Museum, an amazing museum campus worthy of its own blog post – but I’ll leave that to my husband.  I would certainly recommend it if you are in town.  They even have displays of period costume pieces to accompany the beautiful cars.

We made it to Bell’s Eccentric Cafe in time for lunch.  According to their website, they are “Michigan’s oldest brewery and one of the oldest craft brewers east of Colorado, Bell’s Brewery, Inc. offers distinctive beers including Two Hearted and Oberon, which enjoys a cult-like following and who’s release date corresponds with the start of the Major League Baseball season”.

We both ordered a sampler and a bowl of soup and thoroughly enjoyed the atmosphere of their casual tasting room.  We could have easily spent more time, but we visited their General Store to get a few gifts and headed for nearby Arcadia Brewery.

A stark contrast to the worn wood homeyness of Bell’s, Arcadia’s tasting room is sleek, stark and stainless steel.  We chose another sampler from their interesting offerings.  I particularly enjoyed the Jaw Jacker!  There isn’t really a restaurant on the premises (there is a pub at a different Arcadia address in town) but there was a cafeteria style counter where you could get freshly barbecued meats and a few accompaniments, including a cardboard dish of sautéed greens that I thoroughly enjoyed.After a nap back at the B & B, we headed out for dinner at Gonzo’s BiggDogg Brewing .  The place is really unassuming from the outside, and the menu selections were as well.   But the beer was pretty tasty. 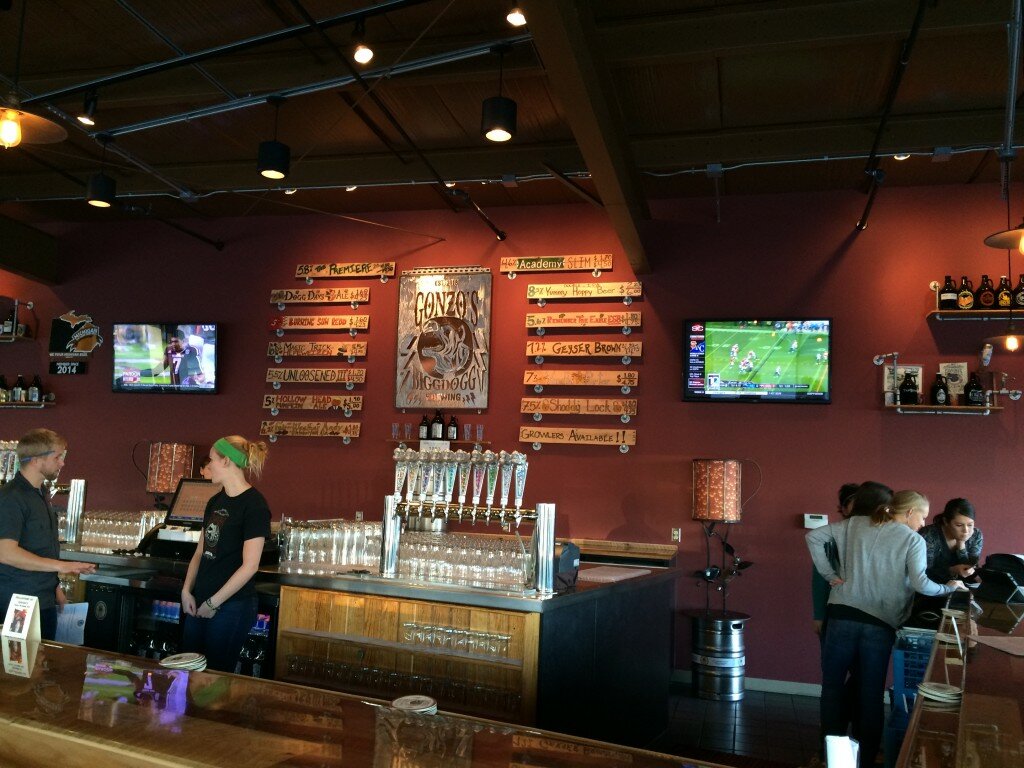 Our evening ended with a short walk to a crusty old establishment that just recently became a brewery as well.  Rupert’s Brew House  is a college dive bar that advertises live music 5 nights a week.  The night we visited the entertainment was provided by young university jazz musicians and Rupert himself.  Rupert is a Great Dane with a bar high nose who has clearly inspired the naming of some of their brews.  My Mulit-grain Mutt was the perfect way to end a pretty perfect day.

A Day of Michigan Wineries 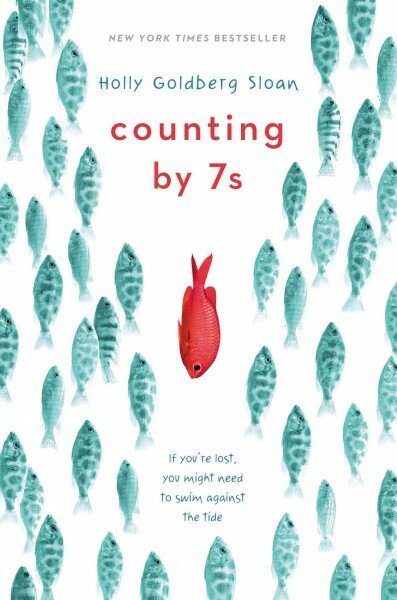 A full page add for counting by 7s by Holly Goldberg Sloan in the Sunday New York Times Book Review a few weeks back intrigued me enough to order the book from the library. When I got the the deaths of the main character’s adoptive parents at the end of the first short chapter, I knew I was hooked.
Willow Chance is a science-obsessed misfit/oddball/lone wolf/weirdo/genius. If all of those character descriptions are accurate, then she fits into 5 of the 7 classifications of students seen by Dell Duke, her school counselor who is himself a counselor’s nightmare. Through Duke, Willow has met lone wolf Quanh-ha and his sister Mai Nguyen, who are Vietnamese. Since Willow was adopted from Vietnam, she connects with these two as “persons of color” like herself. But when she insists that they will be willing to take her into their family upon the deaths of her parents, the greater themes of the book – family, acceptance, grief and recovery – begin to surface.

This book is labeled a YA novel, appropriate for upper elementary grades of gifted students who are often, themselves, intelligent oddballs. (Willow has been treated skeptically by teachers at her new school because no one has ever finished the state proficiency test in 17 minutes before.). She is a protagonist readers will fall in love with, laugh will, and cry with. She reminds me of Jerry Spinelli’s Stargirl – one of my all time favorite characters!

Even if you don’t normally read YA literature, Willow’s story will charm you. I see a movie on the horizon – read it soon!