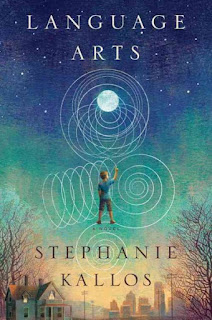 How does an English teacher avoid a novel titled Language Arts?  I certainly could not, especially since I have been big fan of Stephanie Kallos since reading Broken for You in 2005.  And, of course, this cover with its looping arcs is pretty intriguing – and representative.

Language Arts is an ambitious novel – one I almost felt she was not going to be able to pull off due to all its looping arcs.  The main character is Charles Marlow, a high school English teacher who attempts to show students how language will shape and change their lives.  Charlie is also the father of an autistic son, Cody, who never masters the use of language.  Cody, now 21, must be placed in a new adult residence.  Charlie is divorced from his wife, Allison, with whom he has little success in communicating.  During Art Therapy at the new home, Cody collaborates with Sister Georgia, an aging Italian nun who is losing her language, all of which is photographed by one of Charlie’s students who is working there on her senior Language Arts project.  Sound confusing?  It often is.   To further muddy the waters, the timeline of the novel bounces between the present and Charlie’s elementary school days, when he was placed in an experimental language arts program that resulted in him penning an award winning story that was a loosely veiled expose of his parents’ dysfunctional marriage.  Also, symbolically significant is the elementary school instruction Charlie received in the Palmer Handwriting Method and the ways it knit Charlie’s life together with a mentally challenged classmate of his named Dana.

At times the novel nearly fell apart for me.  But there were passages about language – how is serves and fails us as human beings – that salvaged the book for me.  Perhaps it is because my mother suffered from aphasia during her last years with Alzheimers.  Perhaps because I love language, and teaching literature.  Passages like this one make the book worth recommending:

“Memory—uncorrected, uncorroborated, and (by its very nature) unreliable—is what allows us to retroactively create the blueprints of our lives, because it is often impossible to make sense of our lives when we’re inside them, when the narratives are still unfolding: This can’t be happening. Why is this happening? Why is this happening now? Only by looking backward are we able to answer those questions, only through the assist of memory. And who knows how memory will answer? Who will it blame?”

Etta and Otto and Russell and James by Emma Hooper 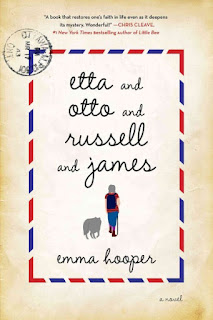 Eighty-three year old Etta is full of life, but she has never seen the ocean!  So she decides to walk some 3,000 kilometers from Saskatchewan, Canada east to the sea.  She leaves a note on the kitchen table for her husband, Otto, stating “I will try to remember to come back”, and loads up provisions including a rifle and some chocolate before heading out.  It is Russell, life-long friend a neighbor to Otto, who eventually decides to set out after Etta.  The final title character, James, can only be described as a supernatural coyote who accompanies Etta along part of her journey.

This novel is all story, and as many of my favorite story tellers do, Hooper paints her landscape with the broad brush of magical realism.  I loved Etta and her feisty determination.  This novel is quirky and engaging.  Want to escape this summer?  Hike along with Etta and James.